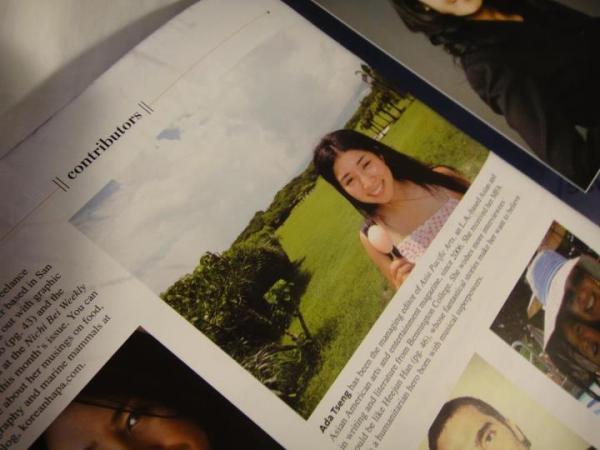 Thanks KoreAm for featuring me on the Contributor’s Page of the July 2012 issue!

A Heejun State of Mind

The singer may have been voted off American Idol, but he explains why his cup, full of colorful hues, runneth over.

At first, his mother thought he might be colorblind. But what they discovered was that the colors he used for his drawings were connected to the songs that were playing in the classroom. So 5-year-old Han would see his surroundings in different hues depending on the music he was hearing.

The millions of viewers who watched Han place ninth in the 11th season of the popular reality TV competition— the farthest a Korean American has gone thus far (former contestants Paul Kim and John Park failed to crack the Top 12)—might wonder if Han is just playing a prank on his interviewer. After all, this is the same jokester who consistently called American idol judge Jennifer Lopez “his wife,” told designer and idol image advisor Tommy Hilfiger that he wanted to dress like Madonna and Michael Bolton, and was reprimanded by judge Steven Tyler for not taking the competition seriously enough.

But Han is very serious. He still experiences music through color (He used to confuse collaborators by asking, “Can we get a little yellow on it? A chord that’s bluish but kind of red?”), and he has a “videographic” memory that’s triggered by music (“If Justin Bieber’s ‘Boyfriend’ was playing in the background now, then five years later, if I heard the same song, I could recount this exact scene in my head.”).

No wonder, for much of Han’s life, he kept his musical talents to himself. Back then, psychologists thought he was crazy, and he still has mixed feelings about the pills they prescribed to rid him of what he considers his extraordinary gift as a songwriter.

Born in South Korea before moving to Flushing, New York, at age 12, Han decided to return to Korea to pursue a singing career. The then-19-year-old thought he could break into the music industry more easily there, but after two years, he returned home empty-handed and found himself in a deep depression.

“It struck me hard because I always thought I could make it,” says Han. “I always thought I’d be a great person who could give back to society, but I was just too small. I was an outsider. I hated myself. I thought that people didn’t like me.”

Back in high school, his cousin had introduced him to Milal Mission, a New York-based Christian nonprofit organization that works with the disabled. Han had volunteered there to fulfill a community service requirement. After his disappointment in Korea, he returned to Milal for a different reason: he needed love.

Although Han initially started volunteering to make himself feel better, he was soon inspired by the youth.

“They are so satisfied with what they have, and they live life without thinking about what’s going to happen tomorrow,” says Han. “They give hugs to everyone, regardless if you’ve taken a shower or not, whether you’re wearing weird clothes. They don’t judge people because they’ve been judged from their birth.

“We’re so greedy, but they’re so peaceful,” he continues. “So I realized: I have depression, but I have legs, hands and eyes. I have too much to not give, to not do anything. That’s when I said, ‘I’m going to do [American idol] for the kids and show them that if you truly believe in yourself, you can become someone.”

From the very first audition, Han understood what would make for great television. He played up his nervousness, so that those prone to underestimating bespectacled Asian men would be shocked by his smooth, soulful voice. He goofed around backstage, but belted out earnest ballads onstage. As weeks passed by, the young man who had only sung publicly in front of a small crowd of Korean grandmas at church suddenly had mainstream America weighing in on his song selections, commenting on his bromance with eventual idol winner Phillip Phillips, and wondering whether his talents were actually better suited for comedy. But, most importantly, he had given Milal Mission national media exposure and attracted numerous charitable donations.

More than three months after being voted off idol, Han is rehearsing for the upcoming idol summer tour, which will begin this month. He’s juggling still-confidential offers from American television shows, and he will start writing and recording his solo album, which will first be released in Korea.

He will be writing songs in both Korean and English. Despite being more influenced by Western soul and R&B music, including Tony Bennett and Stevie Wonder, Han finds it easier to write Korean songs.

“Korean people still make music that you can sing along with, whereas Americans make music that’s easy to listen to,” says Han. “For Koreans, the songs are about loving, breaking up, hurting, and dying. There’s no middle part. But in America, they like to talk about the progression of how we met, how I’m going to treat you right if we ever get to that stage. It’s more honest, realistic, and detailed. You have to make a masterpiece.”

“To me, ‘artist’ is such a lonely word,” he says. “Artists write great songs, but only for themselves. I want to write songs that people can relate to. I just want to be a normal person who’s going after my own heart and helping people.”

This time, he’s not chasing success. His newfound fame, as he explains, can never compare to the more permanent spiritual happiness he derives his family, his church and “his kids,” as he calls his disabled friends at Milal Mission.

“Recently, I’ve been thinking that the colors I see are not really about the music, but about the [person’s] mindset and expression,” says Han. “Because when I play music with the kids [at Milal], it sounds awful because they don’t know how to play the instruments.”

Han smiles, adding, “But I still see the most beautiful colors ever.”

This article was published in the July 2012 issue of KoreAm.

One thought on “A Heejun State of Mind”